Stability of work, the guaranteed production quality, fulfilment of all reasonable demands of consumers, excellent service – all it promoted creation of worthy image of JSC "Grodno Azot" in the world markets of mineral fertilizers and caprolactam. Acknowledgement to that is the delivery to the enterprise a number of high government awards and international prizes.

In 1970, as the repeated winner of the competition between the industrial enterprises, Grodno production association "Azot" has received for eternal storage the Red Banner of the Central Committee of the CPSU and Council of Ministers of the USSR, and in 1981 Grodno production association "Azot" named after S. O. Pritytsky was awarded the Order of People's Friendship.

From 1971 to 1986 GPA "Azot" was the constant winner or the prize-winner of competitions and the owner of a passing Red Banner among enterprises of "SoyuzAzot", and in 1989 was given for eternal storage a passing Red banner of the Ministry of fertilizers of the USSR and the trade union Central Committee.

The enterprise is the winner of awards of Grodno regional executive committee (2002 and 2005), Government of the Republic of Belarus (2006) for achievements in the field of quality and in 2002 JSC "Grodno Azot" was awarded the diploma of Belarus Chamber of commerce and industry as the prize-winner of republican competition"The best exporter of year". By the results of activities in 2007 "Azot" became the winner of town competition among the industrial enterprises with the delivery of the Red Banner and was recognised as the best exporter of production among enterprises of concern "Belneftekhim".

Among the international awards received by "Azot" there are:

JSC "Grodno Azot" is the repeated recipient of awards of international and republican exhibitions.

Many kinds of production manufactured by "Azot" were repeatedly included into the list of"The best goods of the year of the Republic of Belarus", and its plants and industrial divisions were awarded by diplomas for excellent work.

For today open joint-stock company "Grodno Azot" is the owner over 300 awards. 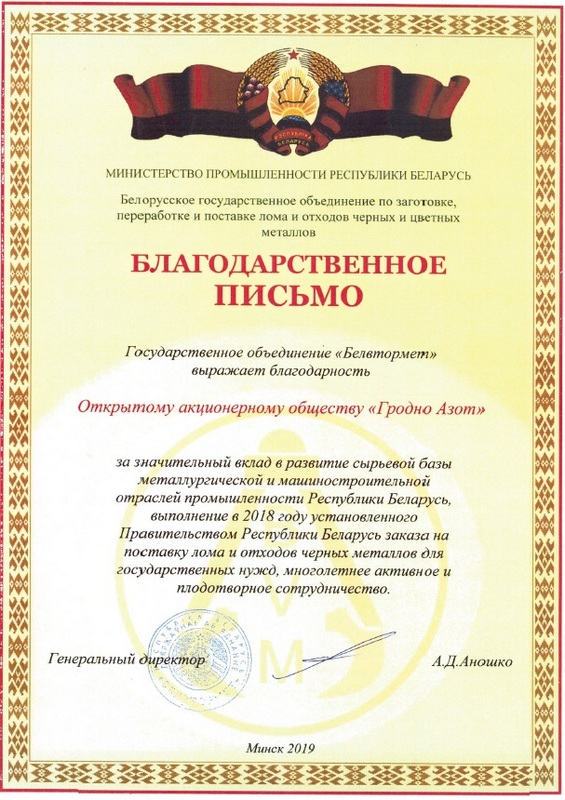