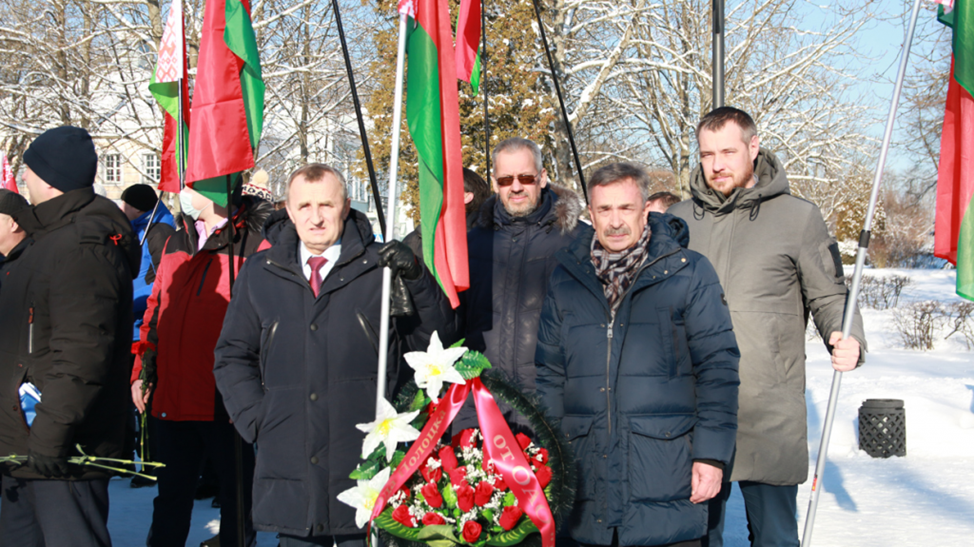 Participants of the thematic action dedicated to the Year of Historical Memory, the forthcoming Republican Referendum on introducing amendments and additions to the Constitution of the Republic of Belarus, and the 25th anniversary of the establishment of the Concern pulled up at the memorial complex "Barrow of Glory".

Here, the leadership of the concern "Belneftekhim", JSC “Grodno Azot” and its branch “Plant Khimvolokno”, representatives of JSC “Lidalakokraska”, GIAP, RUE “Belorusneft-Grodnooblnefteprodukt”, Belkhimprofsoyuz and Administration of Grodno Oktyabrsky District laid floral tributes to the foot of the obelisk in memory of the Soviet Soldiers, Partisans and Underground Fighters who died in the Great Patriotic War.

– “The historical memory of the people and the country is the foundation on which serious decisions are taken by every citizen personally and by the state as a whole, even in the most difficult times," said Andrei Rybakov, Chairman of the сoncern “Belneftekhim”. – “Today we are here to pay tribute to those who fell in the Great Patriotic War, to those who defended our independence, stopped and prevented complete genocide of the nation. We must remember what might have been but for the heroes of those years.”

The General Director of JSC “Grodno Azot”, Igor Lyashenko, also emphasised the significance of the moment and drew attention to the importance of preserving the past:

“Seeing the world developments and how historical memory is being upended, we hold it right to make it compulsory to know and possess information about the historical feat of arms of the people and their contribution to the victory in the Great Patriotic War at the constitutional level. Today, we must take care of the strengthening of our country ourselves. The time is coming when it is necessary to take everything into our strong calloused hands and develop having rolled up our sleeves.”

Having visited to the memorial, the motor rally participants held meetings with Grodno region petrochemical industry teams to discuss the amendments and additions planned to be introduced to the country’s Basic Law during the Republican Referendum. Andrei Rybakov detailed the audience on the keynotes of the updated Constitution draft.

The Chairman of the Belarusian Trade Union of Chemical, Mining and Petroleum Employees, Svetlana Klochok, focused on certain points, particularly on the possibility of exercising one's civic position,

“There have been many serious events in the history of Belarus. The memory and experience of those generations should provide beacons for modern men to navigate in order to preserve the sovereignty of the country. The Constitution is the form of a social contract between the State and a citizen. Everyone must fathom the extent of their participation in the state construction and in the well-being we want.”

At the meeting in Grodno, the participants of the motor rally approved a draft appeal to the employees of the Petrochemical Industry to support amendments to the Constitution of the Republic of Belarus during the Referendum. Belarusians, including Grodno chemists, to take the final decision on February 27.